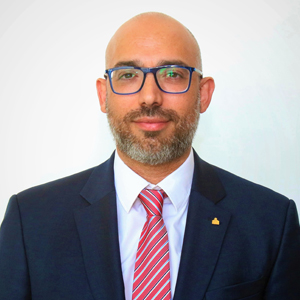 Nicolas has been invited as an expert speaker and panelist at many cancer and patient-related conferences including UICC Congress, ECCO and ESMO Congresses and others. In 2016, he was elected at the Audit Committee of ECPC and in 2017 he was appointed as a Core Committee Officer of the Patient Advocates Working Group of ESMO for a 2 year term. In 2018, he graduated from the European Patients Academy – EUPATI Expert Patient Training Course 2017-2018.

In September of 2017, Nicolas was elected as an Executive Board Member of ECL, re-elected in 2019 as the Treasurer and re-elected in 2021 as the Vice-President. In May 2018, he was appointed as a member of EPF’s Universal Access to Healthcare Working Group.

On a national level, Nicolas serves as the General Secretary to the Board of Directors of the Cyprus Patients Federation (an EPF member), since 2014 and, in September of 2017, he was appointed by the Council of Ministers to serve for a 5 year term as a Member at the Board of Directors of the Cyprus Health Insurance Organization (HIO) as the patients’ representative. HIO’s mission is the implementation of a National Health System in Cyprus.